How a rural tribe is using STEM to support traditional practices

In 2019, a group of enthusiastic tribal members approached Waccamaw Siouan leaders, proposing the launch of a STEM education initiative in the tribal community called STEM Studio.

The most recent initiative, which began earlier this month, has enabled these tribal leaders to connect the growing need for STEM education with its traditional tribal practices for students.

With STEM jobs expected to increase by 8% by 2029, the STEM studio was designed with the aim of encouraging interest in STEM among tribal youth.

STEM Studio’s most recent initiative is the “Build a Wigwam” competition, supported by the Corning Foundation. Wigwams are traditional domed houses made of natural materials. These were common, semi-permanent dwellings used by Indigenous peoples across the United States.

Stay informed.
Invest in independent journalism. And help The 74 make an impact.

For this competition, students were tasked with creating durable, long-lasting replica wigwams no larger than one foot in diameter. To test this, the wigwams were judged on a number of criteria, including hurricane and earthquake tests, whether they used 100% sustainable materials, and whether the design of the wigwam was realistic.

The students used materials such as vines, tree branches and bark. Several wigwams were interactive, including one that replicates a “shock absorber” on top and a string that you pull down.

STEM Studio Director Ashley Lomboy said the response to the project was overwhelming. For Lomboy, the STEM studio aims to create accessible STEM education opportunities for tribal youth, including those who do not live on or near tribal territory.

For this “Build a Wigwam” competition, distance learning students were encouraged to film themselves taking the tests. Because of this commitment to accessibility, tribal members from across the country submitted replica wigwams to the contest, including a family from Virginia.

“Because we’ve had such a great input from the community, I said, you know, we should really try to highlight and really celebrate the kids and what they’ve achieved,” said Lomboy.

From there, she contacted the Columbus County Arts Council to plan an exhibit on wigwams. The STEM Studio was also able to obtain a grant from the North Carolina Arts Council, a division of the Department of Natural and Cultural Resources. 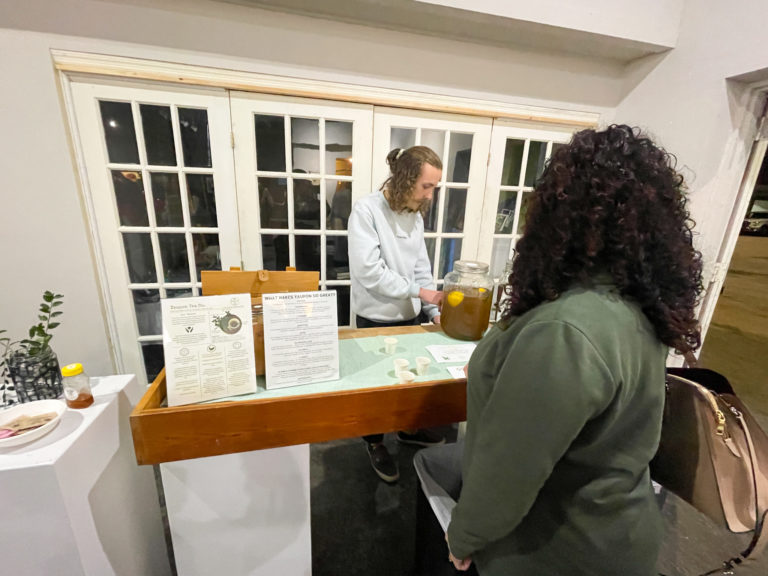 The exhibit featured the wigwams and music of a little turtle Kaya, a traditional singer and songwriter from Robeson County. For Lomboy, the event aimed to showcase current and traditional aspects of Aboriginal culture. The STEM studio has therefore also partnered with Yaupon Tea Co. of Wilmington, North Carolina to provide samples of Yaupon tea.

The Yaupon holly shrub is native to the southeastern United States and was previously used by indigenous peoples for ceremonial and medicinal purposes. Today it is used for its natural caffeine and antioxidant properties. 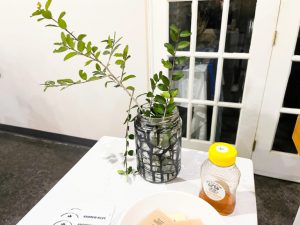 Samples from the Yaupon plant were on display at the show in Whiteville, North Carolina (Cheyenne McNeill/EducationNC)

Lomboy said it was an opportunity to allow tribesmen to connect with some of their history.

“These wigwams were in the 1600s and 1700s and what we would have lived in,” Lomboy said. “I thought it would be really cool if we could have Yaupon tea served, as it was part of the green corn ceremony for that area.”

The Waccamaw Siouan STEM Studio has held over 12 programs since its inception. From the beginning, the leaders intended to expose tribal members – regardless of age – to STEM education. Projects included contests, enrichment days, and more.

With 44 participants, it was the highest number of participants since the start of the program in 2019.

The STEM Studio organizes events through its Facebook page to increase its reach. Its next event is the Yacunne (Fish) Community Camp in April, where tribal members are encouraged to learn best fishing practices, including pond-to-plate best practices. Next is the Waccamaw Siouan STEM Studio MarineQuest day with the University of North Carolina at Wilmington in May.

This article first appeared on EducationNC and is republished here under a Creative Commons license.

Submit a letter to the editor